To view the PDFs you will need the free Adobe Acrobat reader. Click below to download this software.

Tyler County is located in East Texas near the border with Louisiana. Polk County is located to the immediate West of Tyler County.  Pantheon's primary asset is a 50% working interest in 4 projects located in Tyler or Polk counties, East Texas and a 25% working interest in a further project in Polk County. The primary objective of these JV's is the Eagle Ford/Woodbine sandstone formation.  This formation on the JV acreage is believed to be analogous to that of the prolific Double A wells field in Polk county.  The secondary target is the Austin Chalk, proven to exist on the Tyler County prospects.

The following is adapted from an independent assessment of the Austin Chalk, by Norman J. Hyne PhD.

“The Austin Chalk play of Texas and Louisiana is actually well-known and considered an old play. Two of the largest fields in Texas, the Pearsall and Giddings, were found in the 1930s. The early 1980s oil and gas industry boom was driven by economics but the current boom of the 1990s and 2000s is being driven by technology. The future surge will not be driven by oil but by vast reserves of natural gas that are just being located down-dip from the oil production.

The Austin Chalk is a very fine-grained limestone. The chalk is thought to be self sourcing in that the oil and gas in the chalk was formed by organic matter in the chalk. It often has very good porosity but because the pore spaces are very small, it has very low or no matrix permeability. Where the Austin Chalk is permeable and productive is where it is naturally fractured. These “sweet spots” occur where the chalk is densely fractured.

Originally the Austin Chalk was only marginal economically with returns on investments of only 2 - 3 to 1 (revenues of 2 to 3 times investment). Thus the early drilling (1930s to 1970s) was shallow entering only the oil producing leg of the chalk. Such vertical wells would often miss the vertical fractures and be dry holes. The oil boom of the 1980s saw the proliferation of horizontal drain holes. These have a much higher probability of hitting the vertical fractures. The introduction of measurement-while-drilling and logging-while-drilling tools enabled the driller to see the direction in which the bit was going in real time. This development allowed more accurate directional drilling and greatly improved the chances of the well intersecting the north-east trending fractures. Roughly 50% of the horizontal drain wells in the world have been drilled in the Austin Chalk.

The Austin Chalk oil trend is about 30 miles wide. Drilling in the 1990s discovered the Brookeland field along the Texas and Louisiana border. More recently, the discoveries of the Burr Ferry North and Masters Creek fields have extended the trend into Louisiana. 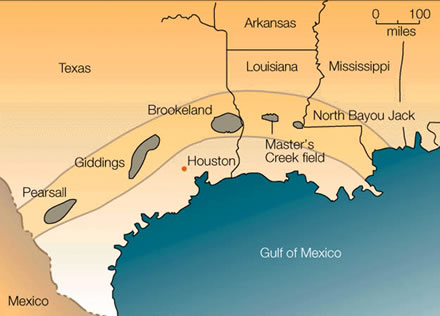 The key play that investors should watch is deep natural gas in the down-dip portion of the Austin Chalk. Oil has been located already up-dip, whereas the gas located down-dip toward the Gulf of Mexico is just being discovered. These natural gas wells will be deeper and more expensive than the up-dip oil wells. Natural gas, however, is more fluid than oil and natural gas wells should produce at a much higher rate than the oil wells.

The deep Austin Chalk gas is sweet with a high Btu content and the gas pipeline infrastructure is already in place. The return on investments in these gas wells is estimated to be in the 5 - 8 to 1 (revenues of 5 to 8 times investment) range with payouts in several months.”